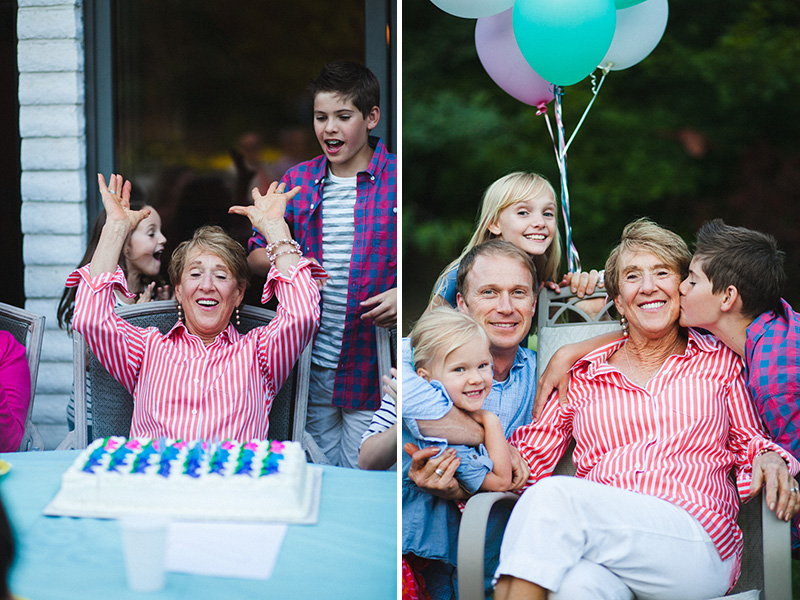 Who is Grandma Sandy? She’s really just a little kid stuck in a grandma suit.

Born in the earlier half of the 1900’s, her favorite activities still include sleepovers, hide-and-seek, and building forts with her grandkids. At family gatherings, while all of the parents are discussing how to raise children, Grandma Sandy can be found rolling around the floor with the little ones, enticing them to rowdiness and mischief.

Though still a child at heart, Grandma Sandy has lived long enough to know that the most important part of her life is her family, and that knowledge is reflected in each and every one of her actions. Whether it’s jumping out of an airplane with a grandson, sliding down the slide at the park, or hosting a girls’ night out with all the granddaughters, you can always count on her to build relationships.

Grandma Sandy has embraced a passion for teaching throughout her life. At age 15, she ran a summer preschool called the Knee High University, and continued to teach in local preschools during college. She earned her Bachelor’s Degree in Special Education. After raising one daughter and six sons, she continued to volunteer in elementary schools, working with children who had difficulty reading.

To be sure, Grandma Sandy is not always hugs and giggles. When April Fool’s rolled around, she was all business. Her children soon realized that if they had OREO cookies in their lunch (a rare treat), that it was a smart idea to trade them for something else and then watch as the new owner discovered the taste of toothpaste-filled OREO’s. As if that wasn’t cruel enough, there was the year when her kids came home to the most delicious-looking chocolate treats, still on the wax paper and looking like the most perfect bite-sized kisses. Who could resist? Of course they popped one right in and began to gobble it up. Only when it was far too late did they realize that what they were feasting on was a chocolate-covered garlic clove. Blech!

Yes, she loves to smile and to make people laugh. And although her own children simply roll their eyes at her erstwhile attempts at tomfoolery, her grandkids are easy victims and fall prey time and again to her clever pranks. It’s a good thing too, because none of her kids could ever hold a candle to her prankity prankness.

In short, Grandma Sandy loves life and believes it should be LIVED every day.

The original “What if…” idea was planted years ago on a family vacation. With family and friends in the car for six hours, conversations eventually turned to “What if…you had no elbows?” It was surprising to see how many answers kids could create or discover. That very question began a journey into miles and miles of creative imagination.

In time, Grandma Sandy saw the value of teaching creative thinking to children in order to help them problem solve. Blending a little bit of crazy with a touch of reality allows everyone to come up with a unique answer to a problem.

Grandma Sandy worked hard to incorporate creative thinking in her family, at times employing methods that most would consider somewhat unconventional. She held family court when one child misbehaved. Her kids still talk about the lesson on profanity where they would all call out every bad word they could think of while it was added to the list of things that should never be said. Oddly enough, Grandma Sandy didn’t believe that bitchin’ should be on that list. Her kids were alright with that. It was still a bitchin’ lesson, and she was a bitchin’ mom.

Always striving to help others open up their imagination, Grandma Sandy decided to write books that could help children learn not only to read, but also to think creatively. Bringing the silly and the unexpected into the process made everything more fun, and was merely a natural step for Grandma. That’s just who she is.

For more original and unorthodox ideas, stay tuned…There are countless legends and myths featuring Grandma Sandy and her exploits. And always there are lessons to be learned. Thank you for teaching those lessons, Grandma Sandy.